Known as the “weed of Mars” in Romanian folklore, the Stinging Nettle is considered as the “fire in the garden”, not only because of the burning sensation caused by its sting, but also because of its purging powers. Photo: Ray Wewerka.

The world of plants and crystals is as fascinating as it is empowering. That’s why I am inviting you to take a dive into this world with me. There’s a lot there waiting to be discovered and experienced, so be my guest! Not only do I want to learn more about it myself, but I want to tell you about Romanian folklore, witchcraft, and what roles these natural wonders play in it. First on my list is the Stinging Nettle,  which happens to share the name with our host.

Not only because we are in Nettle’s Garden right now, but because it is one of the most important plants in Romanian lore and traditional herbalism. It is also very important and significant to me personally, so it’s only appropriate to begin this journey by learning more about it from a unique perspective.

The Common Nettle is one of the most important plants in Romanian folklore and one of the most prominent presences in traditional herbalism for good reasons. In fact, the common nettle was my first introduction to traditional Romanian herbalism. It was so present in my life as a child that I cannot exactly pinpoint the very first memory I have of it – other than touching it and feeling its sting, but I do have one very vivid memory of my grandmother washing my hair and explaining its benefits to me. And the way she talked about it made the old “urzica” (Romanian for nettle) seem alive, almost personified in my perception.

Although the sting of the nettle feels like burning, the “whipping” of certain areas of the body with stinging nettles was believed to “burn” away various illnesses. In some of his texts, even Hippocrates recommended the common nettle as a treatment against certain afflictions. Photo: Kevin Thiele

As a child, I had very long, thick, and shiny dark hair which I received many compliments on (and I still do today). One of the main reasons my hair was so beautiful was because my grandmother used to gather nettles from the riverside, boil them in water, and then rinse my hair with said water while telling me how beautiful my hair will be because of it. In fact, growing up I realized how widespread this hair-washing technique was and how many Romanian women rely on the common nettle to beautify their hair.

Urtica dioica also known as the common or stinging nettle is part of the Urticaceae family and it is a herbaceous perennial flowering plant. It is native to Europe, northern Africa, Asia, and western North America. The name was inspired by the Latin word “urere”, which means “burning” or “to burn”, which is obviously the result of a first-hand experience with this plant. In Antiquity, the nettle was used by the Romans, Greeks, and Geto-Dacians to treat ailments, to cook, and to make certain dyes. Nettle tea was a very common remedy for the common flu, chest pain, and throat issues, and it survived as a remedy for the same afflictions to this day.

But in Romanian folklore, Nettle is more than just a plant. It is seen as a strong entity associated with the war god Mars, which is why it is also known in Romanian folklore as “the weed of Marţ”. It has distinctive qualities that make it worthy of the war god, such as the stinging hairs (trichomes) that protect it,  and resistance to cold and drought. It appears as soon as the winter snow melts in the month of March, the month associated with the war god.

It has a practical and therapeutic importance even in folklore. It is a sacred plant which is eaten only on important days of the year, especially on important days during spring, such as Old Dokia’s days (1st-9th March), the Passion Week, and Easter Saturday. The first nettle meal of the year would often be accompanied by a magick formulae, similar to a prayer, that said: “may my womb hurt when the woman will birth foals, and the mare will birth children”. But the common nettle is not only consumed as a sacred meal.

According to Romanian tradition, if you wash your face during Easter morning with virgin water in which you put a red egg, a coin, and a stinging nettle leaf, your cheeks will be as red as the egg, you will be as strong as the coin, and as tough as a nettle.

Nettles are gathered with the first flowers of the spring by both girls and boys on the day when the birds are betrothed (Dragobete, 24th of February), and the gathering is accompanied by songs such as: “thread of black grass, my mother asks which labor is my dearest, I told you that no labor is, aside the one with my beloved on the meadows, when I choose a nettle to give to the chicks.” The stinging nettle is also used in ritualistic “nettling”, when young men make nettle bouquets that they whip each other with in order to revive their agility and health for the coming year. This ritualistic whipping is reserved for the sacred days of Sângiorz, Easter, and Arminden.

On the first day of May, girls gather nettles very early in the morning, and later boil them in water that they use to rinse their hair with, in order for it to grow long and strong. And similar to the “nettling” tradition, they gently whip everyone in the home with their nettles bouquet in order to awaken their agility and protect them against illnesses.

Tibean thangka showing the Yogi Milarepa in green. Milarepa feeded during his fasting and retreat years in the mountains mainly on Nettle tea, which caused his skin to turn green.

The nettle was often used as a fortifier for the people who were weak and malnourished during winter, which inspired the saying: “the nettle is fed to the mouth of starvation”. On Palm Sunday it is said that the nettles “marry” because they are blooming and they are no longer safe to eat. That’s why in the Romanian folk calendar Palm Sunday is also known as “Nettle’s Wedding Day”. This plant was truly versatile to the Romanian people because not only was it used in remedies and beauty rituals, but the stems were also used to create textile fabrics from.

The Stinging Nettle is also one of the ingredients needed for the Nine Herbs Charm recorded in the Lacnunga manuscript in the 10th-century AD. Aside from the stinging nettle, the other herbs needed for the charm were: mugwort, cockspur grass, lamb’s cress, plantain, mayweed, crab-apple, thyme, and fennel. The Nine Herbs Charm was used to treat infection and poisoning and it consisted mainly of a poem used as incantation and prose instructions on how to prepare the treatment.

The herbs mentioned above were crushed and mixed with old soap, apple juice and a paste from water and ashes. The fennel was boiled into the paste and bathed in beaten egg both before and after the ointment was applied. The lyrical part of the charm was used as an incantation sung 3 times over each of the 9 herbs, as well as into the mouth, ears, and wound of the patient before the ointment was applied. The poem refers to each herb in part as if to a personified entity and describes their powerful qualities. The strophe dedicated to the stinging nettle reads:

The powers of the Stinging Nettle are not only acknowledged in the 9 Herbs Charm, but also in Agrippa’s De Occulta Philosophia. According to him, nettles are Martial plants that by touching the skin, they “burn it, prick it, or make it swell”.

Nowadays, many people tend to think that the Stinging Nettle is mostly surrounded by superstition and not actual facts. Because it can grow in almost anyone’s backyard, although it is often weeded out and thrown away. But the truth is that the common nettle has many wonderful benefits and it is one of the most documented plants in history.

The stinging nettle, although common, truly has healing and beautifying powers. And I am not just saying this because I am an Old Crow in Nettle’s Garden. This “Hail Marry” to the stinging nettle comes from my own experience with the ancient plant and its very endearing significance. You can use various forms of nettle tea for better health, beautiful hair, and to bring you a chance of good luck throughout the year.

To me, the stinging nettle is more than just a medicinal herb. It is a strong presence in Romanian folklore that emanates an ancient aura and its association with the war god Mars only makes it more intriguing to me. It is definitely a herb that should not be missing from any witch’s kitchen and that should be treated with the respect it deserves 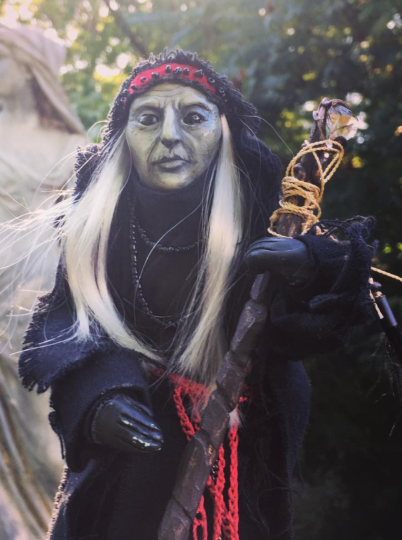 There are quite a few books on like every possible subject piling up in the archives of Western occultism, but books on elementals or the little folk – and gnomes in particular – are still rare. The writings by William Mistele come to mind, and I also … END_OF_DOCUMENT_TOKEN_TO_BE_REPLACED