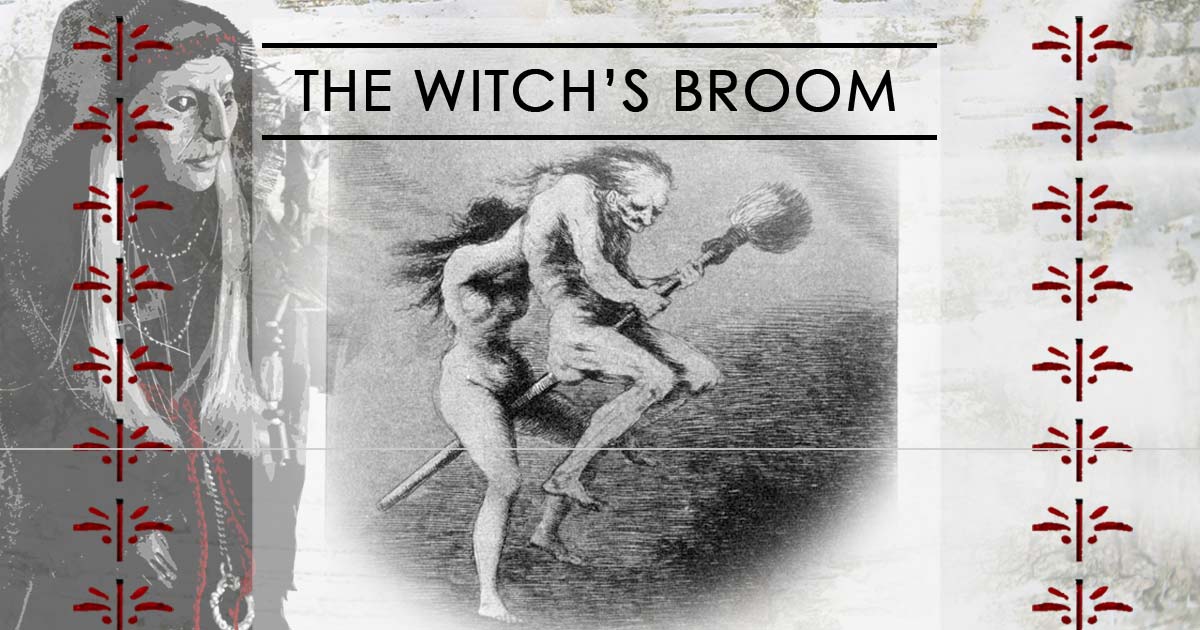 The besom or the witch’s broom is a humble and apparently common household object. It became associated with witchcraft at a time when it was believed that witches concealed their wands among the bristles of their brooms and consequently used them to fly on them to their nocturnal gatherings and sabbaths. It was believed that an ointment was used on the handle of the broom that either made it levitate or made the witch hallucinate and gave her the sensation of flying when mounting it. While nowadays the besom is not a flying vehicle anymore, it is still very potent in ritual magic and witchcraft. While every witch knows that you can use the besom for cleansing and energy sweeping, there is more to the power of the broom that is often overlooked.

In Romanian lore, the besom is a potent object which becomes truly magical at special occasions. For example, for Marina’s Day which is celebrated in Romania on July 17, mothers celebrate Marina, the protector of the souls of dead children, by crafting brooms with bristles made out of Wormwood (Artemisia absinthium) and offering them to each other alongside flowers, corn, and chicks, and they keep the brooms which they use to sweep their homes and yards. They believe that these special brooms not only sweep away the dirt, but also bad luck and spirits such as the strigoi. Strigoii, which are believed to mount the brooms of the villagers to go to their nocturnal gatherings on the nights of Sângiorz (April 23) and Sântandrei (November 30), were unable to mount the brooms made of Wormwood. The Wormwood broom is also used by the Romanian people to bring someone back home, to sweep away evil forces, and even illness by sweeping around the ill. The broom is also a potent tool against Muma Pădurii (the mother of the forest). For this, the broom of the witch or the disenchantress or the broom of the mother whose child is haunted by the mother of the forest is used during a disenchanting ritual by sweeping the entrance to the home or by placing it next to the child’s bed. In all the spells and charms where the broom is used to repel something evil, the disenchantress or the witch always says to said evil to leave and go far away “because I will sweep you with the broom” (“Că eu cu mătura te-oi mătura”) otherwise.

Now we live at a time when brooms are mass-produced, thus they lack personality and ‘magic’ and not many commit to crafting brooms, such as the Wormwood brooms of the Romanian women, but you can craft your own magical broom made out of a tree of your choosing or you can buy one from a specialized seller. Luckily for me, I live in Transylvania, Romania, and here people still make and sell besoms that closely resemble those of our ancestors. I bought my broom from a handcrafter who sells traditionally crafted wooden objects such as spoons, boxes, and besoms on the side of the road. Because of this, each besom is different from the other, it is unique, and hand work was put into it.

When I acquire such objects for my craft, I use an advice which was given to me by a historian who works at the Museum of Arad, my hometown, when I was in 5th grade. I often went there as a child and still do nowadays, to visit the ancient and medieval artifacts connected to my place of birth, and every time I’d reach the end of my visit, I’d stop by the little shop set at the entrance where they sell souvenirs, gemstones, crystals, and even shark fangs (well, there was only one and I bought it!). So, in 5th grade, I stopped by the little shop to buy my first gemstone. I knew nothing about gemstones other than the fact that I wanted to have them at home with me. There were so many beautiful gemstones and I was so torn that I couldn’t decide which one to pick, so I asked the historian lady to help me out. She said: “You see, this is a very personal thing, I cannot choose on your behalf, but here’s an advice you can use from now on: choose the one that winks at you.” Somehow, I knew exactly what she meant and in a split second, the Green Aventurine twinkled at me. So I got it. Ever since, I look for that twinkle in certain objects before I get them. And when I saw the besom I own now, it instantly twinkled at me, so I got it and we’re great partners ever since.  Try to look for that twinkle as well when you choose your broom, if you’re looking to buy one.

How to Create and Use your Besom

There are a few ways in which you can create your own besom. You can start from scratch, begin by acquiring a handle and then make everything yourself from there, or you can acquire a besom and make it your own. If you would like to commit to crafting your own besom from scratch, start by choosing a tree you would like to bond with and one which you know would be accessible to you. You may also choose more than one tree if you’d like the different parts of your broom to be made out of different wood. Doing this will enable you to bring in your space and craft the qualities of that tree and introduce an energy that serves you in your system. After you’ve chosen your tree, choose a special occasion such as your birthday, a full moon, or one of the seasonal festivals from the Wheel of the Year when you will take what you need from the tree to make your besom.

On that special occasion, ask the tree for permission to take a branch and twigs and honor it by leaving an offering (fruit or water). Then activate them during a ceremony. You can do so during the same or another special occasion, by blessing the branch and the twigs or by consecrating them through smudging. Bind the twigs to the branch with a ribbon or rope of your choosing or with another twig if you can. If you already have a handle, you only need to take a few twigs from your tree of choice and use the same process to craft the besom.

Whether you’ve started from scratch, a handle, or you already have a besom, you must make it your own. You do this by carving or painting symbols of your choice on the handle. You can also tie ribbons to it in colors of your choosing, adorn it with bells, and even add feathers in the bristle bouquet. I’ve put a feather from my native totem, the raven, and a couple of peacock feathers among my bristles, but you can use whatever feathers you have or which are of a provenance that is significant to you. If you have a spirit animal that is a bird, you may use feathers that belong to it. This will increase the potency of your broom. To finalize the crafting ritual, gently blow on your broom, from the bristles to the end of the handle, so that it may carry and protect you. In Romanian lore, another way to consecrate the besom is to sweep with it at the entrance of a cemetery.

Now that you have your own magical besom, you may use it for cleansing rituals. You can cleanse your home, by going from room to room and sweeping away negative energy, but make sure that the bristles don’t touch the floor as you do this. If you want to protect your home against unwanted visitors (physical or spiritual), sprinkle some salt at the entrance of your home and then sweep it outside. You can also use it to open and close your ritual circles, to cleanse your ritual space before and after casting a circle, and you can also use it to prevent nightmares or to remove night terrors and sleep paralysis. For this, you only have to place the broom under your bed at night and it will protect you.

Lastly, you may use the crafting of a besom for another witch to symbolize a rite of passage. It is something very endearing that doesn’t have to be reserved only for witches that belong to the same coven. Similar to the tradition on Marina’s Day, one witch may craft a broom for another witch and offer it to her as a way to honor her craft, magical maturation, and continuity of their magical lineage.

As a practitioner of predominantly Romanian folk magic, I rarely use the broom as it is traditionally used in Western witchcraft. In Romanian tradition magical sweeping and cleansing ritual involving the broom are reserved for special occasions such as the night of Sângiorz or Sântandrei, in Romanian spellwork, the bristles of the broom are often used to repel evil forces, illness, or negative energy. This inspired me to develop a ritual that draws from the cleansing power of the broom. While I still use my ritual broom to sweep in the air throughout my home during every New Moon, or to cleanse my sacred space before and after magical work, I sometimes use the bristles when I feel jinxed, unlucky, or like there’s a cloud of negative energy over my head.

At dusk, I take a bristle of my broom, a needle (or a spindle), and a twig of thyme that I hold in my left hand, and with my right hand I hold my hair up. I then spin three times anticlockwise as I say:

Evil eye look away,
Return from whence you came
Or with the broom I’ll sweep you,
With my hair I’ll whip you,
With the needle I’ll prick you,
With thyme I will burn you.

After I do this, I take a strand of my hair, the broom bristle, and the thyme twig and I burn them. I first smudge around myself, and then I continue smudging by going from room to room. I feel much better afterward and as if whatever was bothering me was removed.

If you ever feel like there’s a cloud of negative energy around you and you want it removed quickly and efficiently, perhaps this ritual will work for you as well. If you believe in the cleansing power of your broom, there is no reason why it wouldn’t work. Good luck!

The Old Craft & Nettle the Witch

Moina Mathers, The High Priestess and Mother of the Golden Dawn

The Crow and Raven as Spirit Animals – The Keeper of Mysteries